Exhibition "The Study. Genesis of Artwork. Augustinas Savickas" at the National Gallery of Art

On Friday, November 15 at the National Gallery of Art (Konstitucijos ave. 22, Vilnius) the exhibition "The Study. Genesis of Artwork. Augustinas Savickas" will open. Lewben Art Foundation lended the painting "Living People Meet the Dead (Improvisation Based on a 13th-Century Fresco in Atri Cathedral in Southern Italy)" for the exhibition. 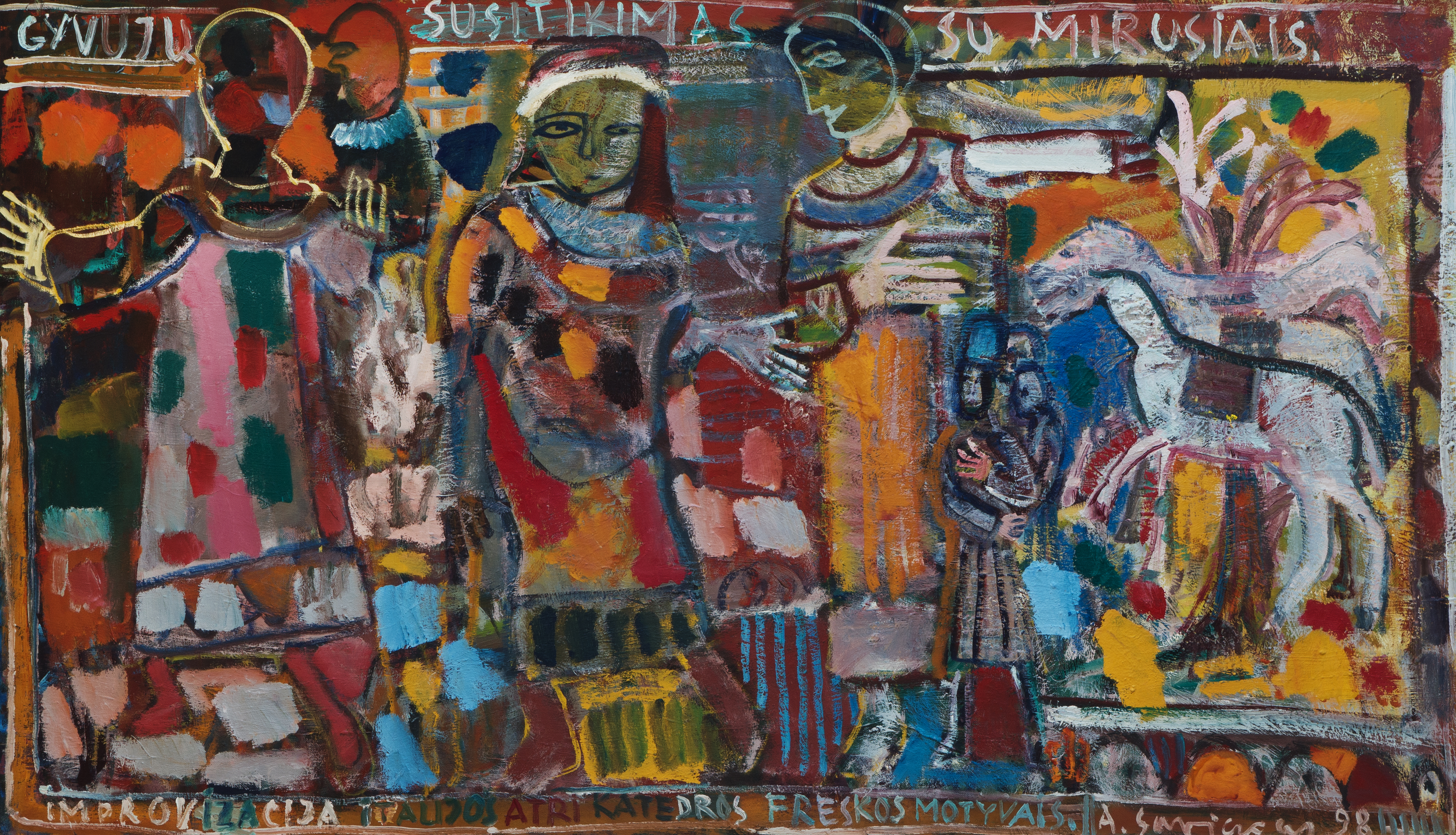 Augustinas Savickas. Living People Meet the Dead (Improvisation Based on a 13th-Century Fresco in Atri Cathedral in Southern Italy), 1998. Oil on canvas, 110 x 190 cm. Collection of the Lewben Art Foundation.

There are three main participants in this exhibition: the author (the artist), his workspace (the workshop or study) and the artwork.

The first participant does not really need to be introduced - Savickas is a bright figure in Lithuanian art history. Painter, art historian, educator, writer. Multicoloured personality, who created in the second half of the century past and at the beginning of this millennium. For many years he lived productively, constantly changing and transforming, the artist represented his own epoch and influenced it.

The artist's workshop, which changed locations and presentations, not only mirrored the social status of this artistic and cultural figure in the Soviet and post-Soviet society, but also encompassed a physical, material representation, of all the artist's aspirations, desires, aims, expectations and even failures - the entire passionate temper. While there, it was possible to see, feel and understand where Savickas was coming from, who he is and where  he is going (to rephrase Paul Gauguin). His workspace was not just defined by four walls, but also a window to the city, nature, his beloved wife Liza's cherished garden; among the surroundings of people, books both flipped through and read as well as other cultural artefacts and memories.

The fundamental purpose of the artist's study: creation of art. Physical work met with scientific research and poetic inspiration. As a creation itself, the study served as a shelter or even a womb, where the works are born, formed and finally brought into the world as artworks. These artworks can be categorised into stages or periods; classified into thematic or conceptual groups - this is done in the collection of works in the exposition. Sometimes it occurs naturally, as though paintings floated together like clouds in the sky of creativity - in the study.

The aim of this exhibition is to recreate Savickas' study. Yet, this restoration is of a symbolic nature. In this sense, the exhibition is reminiscent of the garden of eden (or maybe more so the garden created by his beloved wife Liza) or Čiurlionis-esque (researched and appreciated by the art historian and artist alike). The universe promenades through it,  recalling Savickas' restless creative journey with his own heritage and downfalls; with creation of paintings from sketch to the final piece; with the pursuit of motifs and images stuck in the subconscious.

Augustinas Savickas was born on 12th May 1919 in Copenhagen, in a Lithuanian family of the writer and diplomat Jurgis Savickis and dental doctor Ida Trakiner. In 1939 he began his studies at Kaunas Art School. During the WWII he lost his relatives, withdrew to the depths of the Soviet Union and served in the Red Army. In 1945-1949 he studied painting in Vilnius Institute of Arts (present day Vilnius Academy of Arts), from 1951 to 1993 he lectured there. From 1951 he was a member of the Lithuanian Artists' Union. He wrote in the press on issues of art and culture, published books and scientific studies. In 1993 he received a PhD in Art History. He died on 24th June 2012.